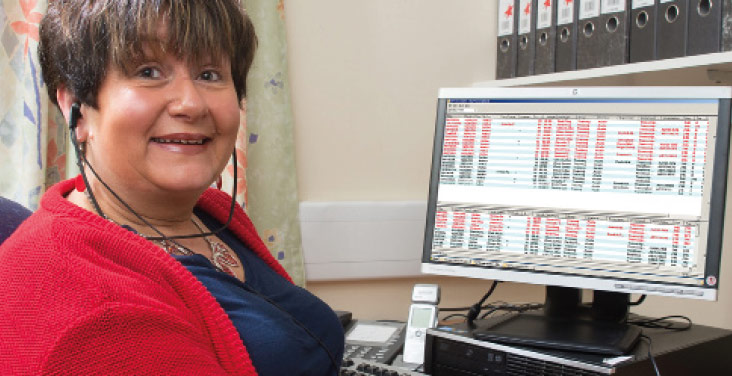 Until the implementation of G2 Speech dictation and speech recognition, the Trust used mainly analogue dictation and transcription equipment. With the analogue process, patient data was recorded on tape and either physically handed to secretarial staff, usually only if dictations were done on site, or sent via internal delivery with patient records to the admin staff. Secretarial staff would then have transcribed the reports from tapes, and left the reports with the clinician for approval and signature, before sending to the recipient.Equipment often broke down and sometimes was unable to be repaired or could only be repaired at a high cost. Tapes were also becoming difficult to source and the sound quality of dictations on tapes that had been frequently re-used was poor and made transcription difficult for the secretarial staff.Unless a clinician had specifically indicated dictations requiring urgent attention, e.g. by recording the dictation on a separate tape, secretarial staff found it time consuming to have to play through one or more tapes in order to locate an urgent report for transcription. Secretaries were also unable to share work, when dictated on a single tape. With the analogue system, there were delays in urgent letters being transcribed due to a lack of identification, e.g. red flags, and timescales for these were not being maintained. There was no backup available if the tape was misplaced or deleted.

The difficulties associated with the ageing analogue system and the need to modernise were the main drivers in moving to a digital dictation system. The Review of Public Administration and consequently a review and restructuring of medical secretaries was underway and Trust senior managers believed that the introduction of digital dictation, and potentially speech recognition, would also support any associated structural changes and help the admin processes become more efficient and streamlined.

A detailed requirement specification was drawn up by a subgroup of project stakeholders in the Trust, which all potential suppliers needed to meet. The chosen system had to be user-friendly, cost effective and meet all the functional requirements stated. The Trust opted for the implementation of MediSpeech for digital dictation by G2 Speech and also purchased 16 speech recognition licenses to give a limited number of users the opportunity to use speech recognition.

A survey was conducted with users and 75% found G2 Speech easy to use and almost 75% were satisfied with its functionality. Secretaries have noticed increased productivity in transcription of reports. The turnaround time for letters has improved significantly. Urgent reports can now be identified and typed on a more timely basis due to clinicians being able to prioritise dictation. The digital audio files have improved sound quality compared to the analogue tapes. Thanks to MediSpeech, sharing of workload is available across all sites and specialties. The reporting process is more streamlined now and GPs have reported quicker turnaround time in receiving clinic letters.

More than 1 million documents have been created since the Trust started working with G2 Speech in 2011.

By ticking this box you are agreeing to receive our newsletter which provides you with company and industry news and updates. You can change your permissions at any time by emailing marketing@g2speech.com with your updated preferences.